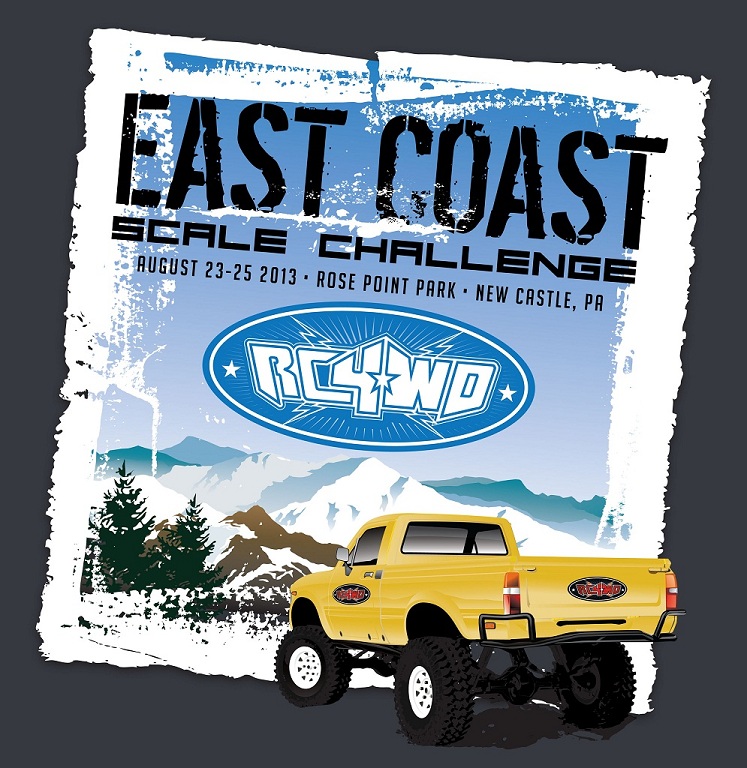 What happens when you mix 62 Drivers, 120 Scale Trucks, 11 Acres of unbelievable Western PA Terrain, close to $10,000 worth of prizes and two guys with a vision? You get the 1st Annual RC4WD East Coast Scale Challenge. The event was the vision of Tom (RC4WD) and myself, for several years.

The east coast has always been behind with major events in the Crawling Hobby. Once I made the decision that I was going to do it…the support was overwhelming. In less than a month, Platinum Sponsorship was filled with great manufacturers like CowRC, GCM, Mayhem Engineering, Pit Bull Tires, RPP Hobby and SuperShafty. Gold was filled just as fast with AJS Machines, Beef Tubes, Castle Creations, CDL Lights, GripFab Machine Works, Hobby Express and Holmes Hobbies. After those we had even more that sponsored at lower levels to just show their support of the event.

The event location was strategically selected due to the unlimited terrain on 11 acres owned by Rick and Debbie Yeager of Rose Point Park Campground. When presented the proposal of the event, they were more than willing to offer their support. They had no idea what was coming down the tracks…

With the logistics in place, announcement was made on February 1, 2013 on all the major RC Crawling and Scale Forums. Within 24 hours, I realized this was going to be something special and a milestone in the Scale Crawling Hobby. The original plan was to offer a National Level Event on the East Coast that the West Coast has always been privy to. Now less than a week after announcement, I was getting commitments from places as far as Oregon, Canada and Oklahoma.

August 22, 2013…Event Check-In was the most amazing experience. People with a love for the RC Scale Hobby would step up to the table. With the excitement of a child telling Santa what they want for Christmas, they would give their real name, forum name and hold out their tickets. I was humbled to hear the responses of gratitude for putting this together.

August 23, 2013 7:00 am – Event Drivers Meeting was held at Rose Point Park Campground’s Pavilion. Guys were surprisingly ready to go. We would start off the day with Scale Class 1 Rigs (30 trucks). These rigs, for ease of understanding, are scale versions of the trucks you would see on the road. Toyota Hilux, Land Rover Defender 90, etc. They are as close to scale as can be and some are so scale that it is hard to say they are an RC Truck in pictures. They are challenged in performance but win over with their Scalism. The courses were mild with some obstacle and sidehilling. Very little water hazards were introduced due to the realism.

At about 1pm we started the Scale Class 3 Trucks (24 Entries). These are the big boys…most have slight resemblances of their, once stock, condition. They have heavy duty everything from Huge Tires to wide axles to unbelievable power to weight ratio. These are the Show Stoppers of the Scale Community. And there was a lot riding on these rigs…the top 10 winners in this class will have the opportunity to run in the Tough Truck Challenge (TTC) on Sunday. The courses that these beasts were facing involved huge verticals, unspeakable declines, off camber navigating and lots of water. Friday Evening there was an impromptu Night Fun Run with all those LED Lights lighting the way.

August 24, 2013 7:00 am started off with a brief Drivers’ Meeting and then Tech for the Scale Class 2 Rigs (24 Entries). To explain these one’s, it would be best put as a rig that you would drive on the street and off-road on the weekends. These are mildly modified Class 1 Rigs with bigger tires, more flex and much more durability. Courses consisted of a myriad of obstacles from rocks to hill climbs to bridges and of course, water. Class 2 is a favorite amongst the drivers due to their close proximity to some of the rigs they drive in full size.

Cheplic Packing in Finleyville, PA supplied a huge pig for the roast we were having in the evening. While that was being cooked, RC4WD organized a Trailfinder 2 Fun Run. This was designed to step away from the competitive pressures and just drive. The challenge was to complete the course in the shortest time. You are probably asking what is so hard about that…well, you were pulling a trailer and had to navigate through obstacles (forward and reverse) that really made you remember that you had a trailer behind you…

The evening ended with a Pig Roast for all the competitors and their families and the Awards Banquet. Awards and Prizes were given out for over two hours. Thanks to the Sponsors, every driver went home with prizes that were close or exceeded the entry fees that they paid to come to the event. That is a huge testament to how passionate and supportive this hobbies vendors and manufacturers are to supporting the RC Scale Hobby.

In the end we had our first ever RC4WD East Coast Scale Challenge Champions:

August 25, 2013 7:00 am – The top 10 in the Class 3 Event earned a place in the Tough Truck Challenge (TTC) on Sunday Morning. This event consisted of some brutal examples of courses that would separate the men from the boys. Courses included a Frame Twister, Mini Rubicon, Hill Climb, Sled Pull and Mud Bogg. Out of the 10 only 7 completed all 5 courses.

When all was said and done here were the results:

The event was a huge success and everyone walked away having a great time….and that is all Tom and myself wanted.